Well, just click the prnt scrn button. The screenshot is saved in Pictures! Easy, if you  know it ... 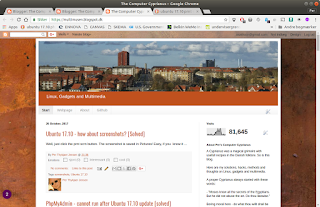 So far I'm not able to install the Ubuntu package from the repo. Solution:

I could not use the old phpmyadmin/ directory. Renamed and chowned to www-data.

Had some problems with the foreign key bookmarks. This guide did the trick: http://foundationphp.com/tutorials/pma_config.php

Just updated to Ubuntu 17.10. The new desktop seems ok, as far as I'm concerned. However there were a freeze or two on the desktop. So the distro is not totally stable yet.

Phpmyadmin and Adminer did not work. Tried to downgrade PHP. No luck. Tried to install via apt several times. Dropped it and went for a manual install. Now Adminer is up and running. I guess that Phpmyadmin will get the same treatment. The binaries are downloaded. So it's probably just a matter of a manual install.

Apart from that everything seems to work. The system feels a little bit faster. Perhaps the new Gnome-based desktop isn't as heavy as Unity. Perhaps a Gnome tweak tool will solve my lust for tampering with the system.
By Per Thykjær Jensen @ 22:49 No comments:

Hacks and tips for Linux, gadgets and multimedia nerds.

Per's Hacks and Solutions by Per Thykjaer Jensen is licensed under a Creative Commons Navngivelse-Ikke-kommerciel-Ingen bearbejdelser 2.5 Danmark License.